The cover of this unique book written by the Florida Department of State, Division of Historical Resources is a quilt, representing the intricate and diverse patterns of women’s lives.

The Florida Women’s Heritage Trail gives a brief outline of over 100 women significant to Florida history, beginning with the early native Indians and Spanish pioneers and continuing through the end of the 20th century. It’s organized by county and location of historic site and marker, illustrating their role in defining Florida’s past, present and future.

The Division of Library and Information Services from Florida gives a great list of books and publications available for researching the lives of women in Florida. Some great books include:

The Division of Library and Information Services from Florida also brings us a list of articles and digital resources that may be of interest to those researching the women in their family:

2020 celebrates the 100th anniversary of women’s right to vote!

Mary Nolan from Jacksonville, Florida was an older activist in the National Women’s Party. She was sent to prison five times as a result of her activism. Nolan was there for the “Night of Terror” at the Occoquan Workhouse in Virginia, during which guards turned violent and attacked the imprisoned suffragettes. She was arrested many times during the Silent Sentinel demonstrations outside of the Whitehouse. One judge offered to free Nolan, due to her age, and she allegedly responded, “Your honor, I have a nephew fighting for democracy in France. He is offering his life for his country. I should be ashamed if I did not join these brave women in their fight for democracy in America. I should be proud of the honor to die in prison for the liberty of American women.” Mary Nolan became one of the first women to vote in Florida.

More about Suffragette’s in Florida:

According to their website, The Florida Women’s Hall of Fame was created by a 1982 Florida Statute to honor women who  have made significant contributions to the improvement of life for women and all Florida citizens. These women are immortalized on an honorary wall in the halls of the Florida Capitol, whose stories will be shared for future generations.

The 2019 inductees include Doris Mae Barnes of North Miami, Dr. Judith Ann Bense of Pensacola, and Mildred Wilborn Gildersleeve of Lake Worth.

Editor of the Fresh from the FSGS newsletter. A lover of history, genealogy, and everything Florida! Ashley Gonzalez is a Florida based researcher and genealogist. She has been tracing her Florida family history and her husband's Cuban roots for more than 20 years. 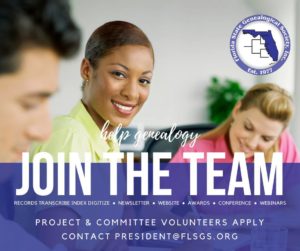